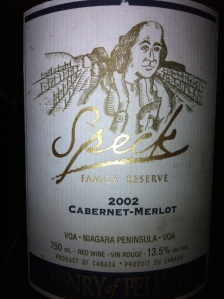 Family get-togethers such as Thanksgiving, Easter and Christmas are great reasons to open up those special bottles of wine from the cellar. For both the selections I took down to my parent’s place I chose wines that I had more than one bottle of to see how they were evolving. The first bottle opened on the weekend was the 2002 Henry of Pelham Speck Family Reserve Cabernet-Merlot VQA Niagara Peninsula VQA that I picked up on a trip to the Niagara Region in 2007. The Speck Family Reserve is the highest tier of wines produced by Henry of Pelham, wines made for cellaring and longer-term enjoyment.

Made from a blend of Cabernet Sauvignon (33%), Cabernet Franc (19%) and Merlot (48%), the fruit was cropped at approximately 2 tonnes per acre from some of the oldest blocks held by the Speck Family. With a saturated inky purple colour, I was surprised that there wasn’t even a hint of brick on the rim after over 10 years of bottle age. The nose matched the deep, dark colour with copious dark fruit – blackberry, black cherry, black raspberry – along with printer’s ink, wet chalkboard, nasturtiums and a hint of black pepper and a high floral note. My beautiful wife detected black cherry, black plums and cinnamon. The dark fruit was replayed on the palate, dusty dry tannins with grip and bite (in a good way) and a spicy fruitiness. My beautiful wife thought it tasted like leather and plums.

This wine still had a brooding strength, a powerful, manly wine that is still in-your-face in its style. Simply awesome, I am so happy I bought two bottles 7 years ago and have had the patience to not open them. It will be a lot tougher now that I know what a treasure lies beneath that other cork.

Error: Twitter did not respond. Please wait a few minutes and refresh this page.